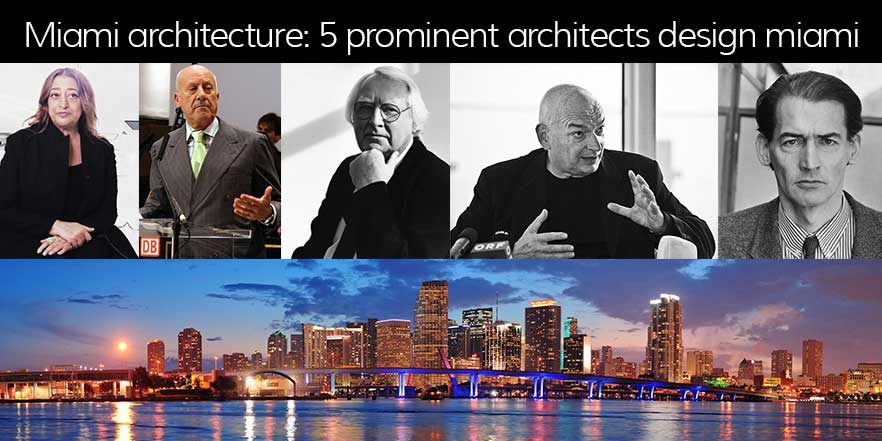 A pioneer architect, Zaha Hadid has left her imprint on the design world that encompasses Miami. Only recently had she brought her talents to “The Magic City” having designed the “One Thousand Museum” prior to her passing in late March 31st, 2016. The sky-rocketing 62-story climb was considered a complex structure that was enveloped by an exoskeleton made up of thousands of lightweight concrete pieces that were fortified by glass fibers. Some say the building’s renderings emit a “Star-Trek” feel in this 21st Century. The iconic structure will be featured in a documentary film titled “Impossible Builds” on PBS and Discovery Channel.

French architect Jean Nouvel’s very first Residential project in Miami has brought elevation to a new level. His innovative design has brought the Monad Terrace up 11 feet above sea level in order to manage the high risk of floods in the South Beach area. The residential development is surrounded by other historical Art Deco buildings designed by other well-known architects such as Lawrence Murray Dixon. The 59 water-front residences overlooking Biscayne Bay are split into two with a central outdoor space that includes a central pool and lagoon. “It’s all about the water,” says Nouvel. “And all the design work is to create a vision framing the lagoon and the bay.”

Renowned architect Norman Foster, of Foster + Partners and a winner of the Pritzker Prize, has signed on to design two skyscraping condo towers in Brickell that are said to soar to heights of 1,049 feet and 1,018 feet. The “Towers by Foster + Partners”, if built, will be considered one of the tallest buildings in the Southeast Region. There are plans to include a plaza, with shops, restaurants and art galleries to serve the community and the new residents of the tower. Foster was also responsible for the record breaking sale of the Faena House condo tower design that stretches along Miami Beach.

Remment Lucas “Rem” Koolhaas’, a Dutch architect, most recent work includes “perforated skin” on Faena Car Park, OMA’s (Koolhaas’ firm) first freestanding garage. The installation began in 2016. The futuristic facade is part of the state-of-the-art parking structure which references modern, tropical architecture with a porous area to facilitate ventilation. The Faena Car Park is part of Faena Art Center within the Faena District, located in Miami Beach, which stretches 6 blocks along Collins Ave. The district includes the beachside condominium tower by Foster + Partners and the restoration of the landmark Saxony Hotel.

The work of Richard Meier & Partners includes over 130 projects around the world. Meier is well known for his favoritism over the color white describing it as “the most wonderful color, because within it you can see all the colors of the rainbow”. The Beach House, a project by Meier from 2004 thru 2011, is a 12 story glass enclosed luxury condominium on the beachfront that offers unobstructed views of the Atlantic Ocean. It is within the proximity of the Bal Harbour shops and the offerings of Miami Beach’s Art Deco district of nightlife, beaches and high scale restaurants.