The richess Miami Brickell has to offer 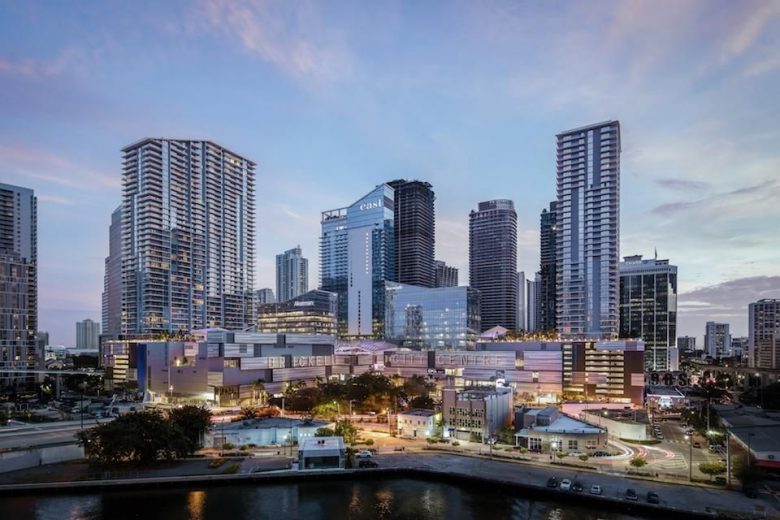 Every once in a while we like to wonder about the future- what will the cities look like? Will buildings reach new heights? Will humanity’s lifestyle improve? How will architects and designers of the future incorporate sustainability into their work? The best part about these questions is that they have no definitive answer and, therefore; we can create countless of different scenarios in our head. On the other hand, by looking or rather, truly observing the world around us and the developments that define it, we will realize that the future is not as far as it seems. The surging innovations in modern cities like Miami that provide the opportunities to develop the ideas of its cosmopolitan population and turn them into a reality. The perfect example of this is Miami Brickell District, internationally renown as “the Manhattan of the South”.

The atmosphere of Brickell has been compared to that of avant-garde cities like New York and Chicago where something is always happening any day at any time. Citizens within this urban landscape have access to numerous attractions, bars and restaurants featuring diverse cuisines, business opportunities, and ideal residences with magnificent ocean views. The allure keeps growing with the introduction of new hotels like the East Miami, SLS Lux Brickell and the Mandarin Oriental among others, as well as cultural centers that include the Perez Art Museum and the Phillip and Patricia Frost Museum of Science. Among the works of greater size, the Brickell City Center mixed-use development stands out for its inventive use of space and combination of science and sustainable design through the monumental Climate Ribbon that works as an environmental management system spanning across three city blocks. What is known today as one of Miami’s key landmarks came about through the partnership between Swire Properties, Simon Property Group and the Whitman Family of the famous Bal Harbour Shops. Nonetheless, this is only one of the countless sights that the district has to offer. Therefore, to understand the uniqueness of such works it is important to first take a look at where it all began.

A look at the past

The neighborhood’s settlement in the modern times came about in the 1800’s with the arrival of a group of pioneers; among them, William Brickell and his wife, Mary. The family’s land extended all the way from Coconut Grove to the Miami River which, in combination with a second contributor, was enough to light the spark of something new and outstanding. The second figure was the visionary Julia Tuttle who gained the attention of no other than Henry M. Flagler, Florida’s East coast railroad and resort hotel magnate. After achieving to extend his interests to this growing area, both Tuttle and Brickell bestowed part of their properties to the railway which brought further development and helped establish the district as Miami’s ‘Millionaire’s Row’ throughout the 1900’s. The historic mansions and buildings that surged during this time were quickly replaced by the five-star hotels, office buildings and modern residences that today distinguish Brickell as one of the key financial districts of the United States.

Brickell is primarily known as the go-to place for innovative entrepreneurs and determined businesspeople who wish to launch their projects into the global market. This urban neighborhood is indeed the place to work on new ideas; however, as part of the greater Downtown Miami, it also offers plenty of entertainment and luxury services. Whereas the day is reserved to work and casual activities, the nightlife completely transforms the district with its numerous clubs, high-rises, bars and restaurants which paint the streets in vibrant and electric colors that are reflected across every smooth, glass surface. This perfect balance between duty and pleasure leaves room for another factor that is sometimes hard to spot within hectic urban cities: the community feeling. It is a fact of life that with prosperity often comes contentment and the desire to settle in this environment that has shown such positive outcomes. The success of businesses is increasingly attracting more and more families who are making Miami Brickell their home; turning the district into a family-friendly area where children can also enjoy the contemporary sights and entertainment opportunities within this safe space.

Greatness did not simply arrive to Brickell, it was crafted- it surged from the ideas of influential figures in the world of architecture and design. Some of these leaders include the famous Arquitectonica firm led by Principals, Bernardo Fort-Brescia and Laurinda Spear, the interior design company, Richardson Sadeki, and HDA| HUGH DUTTON & ASSOCIES, just to name a few. It was precisely these three companies that brought to the neighborhood the monumental Brickell City Center complex featuring five million square feet of luxury shops, office towers, a 352- suite hotel and most impressive of all: the Climate Ribbon canopy. This complex free-form structure has earned a LEED Gold certification award for its fundamental use in moderating the sun’s rays, collecting rainwater and capturing southeastern trade winds.

Although this work is hard to replicate, there have also been other equally noteworthy buildings such as the imposing Panorama Tower. Rising at 868 feet, the structure has earned recognition as the tallest building in the city. This project was undertaken by Tibor Hollo who hired the AIA architect, Moshe Cosicher to develop the sophisticated expanse of residential, hotel and retail space. The structure was furthered embellished by its modern interiors comprised of nine-foot ceilings and floor to ceiling windows that lead to Miami’s mesmerizing water views and cityscape. In addition, residences also display quality features, including Bosch appliances, soundproofing, Delta fixtures, and expansive private balconies.

Public spaces are not simply made to look beautiful and fulfil a single use; they should also satisfy individuals’ quest for knowledge, spark interest and curiosity among the youth and encourage people to view their surroundings from another perspective. This is precisely what art and science do in Brickell through institutions such as the Perez Art Museum and the Phillip and Patricia Frost Museum of Science. The first is dedicated to the collection of modern and contemporary international art and its transmission as a form of cultural exchange, interaction and communication. Its unique exhibits include collections of local artists such as Lynne Golob Gelfman, as well as international works like Hew Locke’s ‘floating ships’. The forum itself was brought to life by the architects Herzog & de Meuron who viewed the construction of the museum as an opportunity to create a sustainable and educational building incorporating the peaceful views of Biscayne Bay and the nearby hanging gardens.

Likewise, the Phillip and Patricia Frost Museum of Science contributes to people’s understanding of the solar system, biology, physics, the universe, technology and the field of science itself. Each section- the Frost Planetarium, Aquarium, and North and West wings- engage the audience in the world of question solving and creation through interactive activities and exhibits that inspire visitors to delve deeper into the secrets of the world. All these features are encapsulated within four open-armed buildings surrounded by the vibrant vegetation of the Museum Park and the blue waters of Biscayne Bay. The North and West wings are dressed in a geometrical facade with a pixel texture that resembles plant cells or computer codes. On the other hand, the Aquarium features a drip shape made up of curved lines that end in an oblong structure which contrasts with the grand sphere that makes up the Planetarium. This last section unifies the buildings around it by adding a dark blue color referencing outer space and completing the tone scheme composed of turquoise and dark blue. At the same time it brings a soft side to the sharp angles of the square buildings that make up Miami’s urban landscape.

Next time you find your mind stepping outside the present’s boundaries and into the realm of the future, allow your imagination to be inspired by the recent developments of contemporary artists, architects, designers and entrepreneurs. You will perhaps find several similarities between your vision of the future and the most current and influential works. Miami Brickell is overflowing with such creations; its streets feature the outcome of innovative projects that once began as dreams and ideas. The magic of this district is not solely within the buildings and features it already has; it rather rests upon the inventions that are yet to come and what is even better: the fact that they can come from anywhere at any moment.