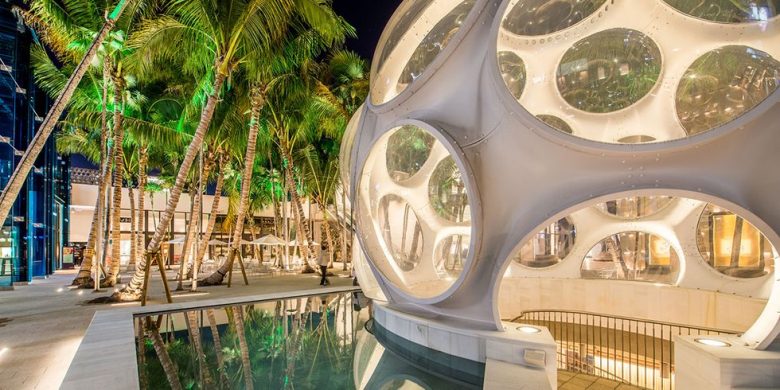 Innovative designs, fashion and contemporary artwork coexist in the same sophisticated environment belonging to one of Miami’s most creative neighborhoods. This oasis known as the Design District embodies the same dynamism and urban excitement that characterizes the classical notion of a Greek polis. Both are centers where new ideas, products, art and knowledge are continuously shared and developed. The busy district includes over 120 luxury shops and cultural institutions which promote the growth of Miami’s image as a cosmopolitan and pioneering city. There is not a single person who cannot find inspiration within this medley of opportunities.

More than 20 years ago the Design District was considered to be a neighborhood like any other until Craig Robins, a visionary man who imagined more for the future of this area, decided to take the initiative and invest in its potential. He began acquiring buildings to introduce a refreshing change and reinvigorate the overlooked community. Eventually, the district caught the attention of famous design brands, art institutions as well as restaurants and it was not long before the historical buildings were readapted to fit the new style of the neighborhood. In 2011 the project grew to such an extent that the Real Estate led by L. Catterton joined Robins in a partnership that would escalate the area’s visibility to an international level. Their success became evident when the LVMH luxury brands opened their stores in the Design District to showcase a glimpse of their latest designs- thus establishing the neighborhood as an avant-garde space at the front of the rising movements.

Central Miami is one of the most coveted locations by numerous businesses and a portion of it is fortunately held by the Design District which is conveniently situated at the heart of downtown at a close distance from South beach and easily accessible within a pedestrian environment. The fact that it is also flanked by some of the most iconic and modern examples of architecture in the city definitely plays an important role in attracting visitors. People, not only within different parts of the country but also from all over the world, are drawn to the renown hotspots concentrated within the area such as the ICA Miami, L’Atelier de Joel Robuchon, Dior, Cartier, the De La Cruz Collection and top dining destinations like OTL and Michael’s Genuine Food & Drink.

What you will find

Design District pays tribute to the limitless human creativity and experimentation through the Institute of Contemporary Art Miami which draws visitors into a surreal landscape shaped by local, international, famous and emerging artists. This space is sheltered by a futuristic metallic structure composed of geometric patterns which overall displays one of a kind programs, collections and exhibitions that challenge viewers to explore different stories and voices that step outside the conventional boundaries. This concept serves as the backbone of the Design District and it is consistently recreated in several other museums; one of them being the de la Cruz Collection. Access to modern art is facilitated to all visitors at no cost and year-long exhibitions, lectures, workshops and even student travel and pre-college programs are developed to nurture the love for art within the community. Collectors Rosa and Carlos de la Cruz funded this museum in 2009 following the same passion and ideals that inspired so many other artists, collectors and educators that today contribute to this exceptional district.

Miami not only provides plenty of spaces to admire art but also the necessary means to create it. An example of this is the Italian fashion, art and design school- Instituto Marangoni- elevated within the exuberant atmosphere of the Design District. Its modern façade with a gothic twist introduced by roman columns and arched windows makes reference to its historical reputation as one of the top institutes that has successfully trained more than 45,000 professionals of the fashion and design industry. Across the globe different continents count with several of the institute’s schools; however, Miami is the only one that can pride itself in being the first city in the United States to house one of its buildings. Under the leadership of Hakan Baykam, president of the US school, the Instituto Marangoni is bound to expand further through the collective work of the new Advisory Board in the Americas, comprised of figures such as Esteban Cortazar, Carlo D’Amario, Karla Martinez and Paula Cademartori among others.

The dreamlike experience generated in this one of a kind neighborhood is not bound solely to the interiors and the products they offer- it is also manifested through surreal architectural works such as Daniel Toole’s Jade and Steel alleys. The first one, completed in 2017, breaks with the conventional rectangular structure of the surrounding buildings and introduces a flexible perspective of light. Its parabolic walls and uneven corners give it the appearance of a stately entrance to a fairytale garden where elegant trees stretch their delicate branches past the concrete structure as if trying to get a glimpse of the luxurious world awaiting outside. In comparison, Tool’s second work- Steel Alley- is primarily focused on the tactile aspect of design. Despite the cold touch of steel, the rugged walls expand through folded rusted plates that come together to embrace the viewer. The effect of this inner weaving of steel creates the sensation of standing in the center of a mysterious cave that contrasts with the otherwise sleek and composed style of the neighborhood.

Paris has the historically renown Louvre, Athens boasts with the Acropolis museum and on the other side of the world one can find the non-profit Yuz Museum in Shanghai; nonetheless, Miami has something unique that cannot be kept within closed doors. Across the famous Design District art escapes the margins of a canvas to prove that it can be reproduced in every aspect of the human existence: starting from the most rudimentary of sketches and designs only to emerge as the elaborate structures and fashionable clothing of modern century. This neighborhood bridges all the generational, background and cultural differences among people by introducing a contemporary language that can be understood by all viewers and art lovers alike. Today we see a new Babel tower that instead of rising above the human realm stretches horizontally to include every available space in the sharing and mixing of ideas that will shape the coming years.