Miami’s restless streets are buzzing with excitement as people move from place to place like mesmerizing flashes of tropical colors. The only static features are the towering glass buildings that define the modern cityscape. Within this hubris of noise and activity one can distinguish a name dancing across everyone’s lips ‘The Grove’. It has a mysterious and enchanting allure that describes precisely what it stands for- a fascinating neighborhood comprised of rich gardens, bayfront attractions and cultural institutions. As Miami’s oldest neighborhood, its historical significance becomes self-evident in the architecture that extends across the area. Old and new, classic and contemporary; the varied selection of buildings depicts the evolution of the community and most importantly, an enduring appreciation for progressive design. Today we give you a glimpse of some of the Grove’s architectural jewels.

The romantic gardens, humanist approach and elegant naturalism that characterised the Renaissance are today admired in the XVI century Italian mansion known as Villa Vizcaya. Although a considerable time has passed since it was built between 1914 and 1916 with the purpose of becoming the winter home of James Deering, the Dade County managed to preserve the historical essence of the building by turning it into a museum. People of all ages can admire the 70 rooms adorned with the original decorations and a collection of European, Asian and American artworks.

The stunning Italian gardens one can see today are a clear reflection of the 1914 original design by the Colombian landscape architect, Diego Suarez. The meticulous roots, bushes and trees are also home to beautiful statues, silently observing from their positions in the garden- next to the walking paths, ponds and cascades while others, less visible, remain guarding the secret areas of the gardens. This serene composition strikes a perfect balance with the classic building in the background with impressive interiors adorned by hand-painted wallpaper, a grand music room modeled after the style of italian palaces and a delicate glassware and dinner set from 1916 that remains intact to this day. Nonetheless, what catched the initial attention is the timeless venetian stone barge positioned parallel to the front of the villa, thus strengthening the sensation of being transported to an entirely different time and place.

Word of the Villa’s one of a kind beauty has extended so far as to attract renown figures such as Queen Elizabeth II, Pope Juan Pablo II, the Kings of Spain and Ronald Reagan. Its grounds have even served as the setting for several movies like Ace Ventura: Pet Detective, Airport 77 and Bad Boys II. Perhaps you can even recognize the building in some episodes from the CSI: Miami series.

The classic charm of the neighborhood reaches across Biscayne Bay all the way downtown thanks to the glamorous presence of The Ritz Carlton Coconut Grove. This hotel emanates the elegance of a golden age in the history of this city known for its sophisticated cocktail bars, exclusive balconies, soulful music, lavish furnishing and fine dining.

Visitors step into the dramatic entrance of a lobby surrounded by limestone walls and columns that imitate the jeweled plumage of the local peacocks: with shimmering green, blue and purple mosaics that contrast against marble floors which could very well belong to a ballroom. This image of grandiosity is complemented by a carefully selected arrangement of furniture including velvet-lined sofas and modern black armchairs overlooking the floor-to-ceiling windows with direct views of the patio and its stone fountain which comes to life at night under the natural glow of the moon and delicate lights hidden underwater. The myriad of trees and flowers found in this outdoor section are also present in the interiors decorated by palm trees, orchids, roses and bright carnation centerpieces that emanate liveliness and grace within the opulent rooms, transforming each section of the hotel into a welcoming space.

The lucky guests of Coconut Grove’s Ritz Carlton enter a plush paradise surrounded by blue: the impeccable Miami sky above melting into the shimmering waters of Biscayne Bay and the extensive pool imitating the turquoise tones of Miami’s famous beaches. The two 22-story exclusive towers house no less than 115 guest rooms and suites, a 6,000-square-food Boutique Spa and Fitness center, spacious event and pre-function spaces with a 3,200-square-foot garden courtyard and an extensive ballroom. This composition follows the high guidelines set by European palaces and noble courtrooms dictated by elegance, comfort and luxury.

The neighborhood’s community library not only honors the intellectual nourishment of its inhabitants but also the historical roots of the district. The current building designed by the T. Triplett Russell and Associates firm maintains the original facade of the 1901 design; easily identifiable by the rustic structure built with native materials. The oolithic limestone walls seem to almost merge with the surrounding foliage that encapsulates the building in a tropical cocoon. Nonetheless, within this image of perfect syncretism between nature and architecture, one element stands out: the steep A-frame roof that resembles an Aztec pyramid luring visitors to explore its secrets. This cabin-like building is easily identifiable from a distance not only for its design but also due to the tranquility and natural glamour it exudes which marks it as a place of quiet learning and contemplation, open to audiences of all ages and backgrounds.

While most libraries focus on the interior, the Coconut Grove Branch Library seeks to blend with the landscape’s beauty by offering readers the opportunity to relax outdoors on any of the built-in seats of the wooden veranda shaded by metal slats. The greenery that surrounds this vintage library also serves to shelter it from the restless atmosphere of the urban city; the small historical oasis is the place to go for those who wish to avoid any distractions and instead focus on the pages of a book, work or simply enjoy the peacefulness of silence.

The iconic Player’s State Theater from 1927 has metamorphosed countless of times and still, its essence remains. As a historical landmark, its original structure designed by architect Richard Kiehnel of Kiehnel and Elliott, cannot be completely changed or destroyed. Since it was last used between 1964 and 1965 by The Miami Actors Company, the site has remained inactive as it awaits its grand reopening. Under the care of the new owners- the Miami-Dade County and with the help of Arquitectonica- the building will regain its past splendor with an unexpectedly modern touch.

The new plans suggest the preservation of the historical front facing Main Highway which would stand as a separate structure occupied by shops, restaurants and maybe even offices and apartments. The classic double stage proscenium arches and Mediterranean columns will also remain to adorn the contemporary 300-seat auditorium that forms part of the new theater building, sheltered behind the original by the greenery from the public plaza.

The three-story, fully restored building will pluck away at the structural deterioration of the original by replacing outdated features and introducing modern element such as glass-sheathed doors and a rare gabion wall: rock covered by a metallic mesh that will surround the front and sides of the new theatre. With the reopening of the historical building, an improved theatre and new shopfronts facing the street, Coconut Grove will witness yet another cultural renaissance.

The two spiraling towers that rise 20 stories above the bay-front command the attention of anyone residing or passing by the Coconut Grove neighborhood. Designed by none other than the renown architect Bjarke Ingels and developed by Miami’s Terra Group real-estate agency, The Grove has proved to be a success. These modern buildings comprised of 96 residences are fused with a unique dynamism created by rotating floor plates that shift every three feet beginning from the 3rd floor until the 17th. From outside this design resembles twisting trees that reach out gracefully towards the sun while shading the native South Florida gardens crafted by landscape architect, Raymond Jungles.

Each residence is gifted with extensive panoramic views of the bays, the marina and an ever-changing Miami skyline. The open theme and balance between indoors and outdoors prevents the overall structure from remaining isolated from the native landscape; instead the glass architecture coincides with the ecologically oriented gardens. This exclusive landscape is carefully arranged with over 15,000 plants covering spiraling oolithic rock beds that accompany the 450 canopy and palm trees spread around an extensive pool and the outer sections of the buildings.
Additionally, the towers’ impressive facade is touched up by sweeping balconies that wrap around shaded terraces, accessible through floor-to-ceiling windows that welcome the fresh sea breeze. Residents can look past these brise soleil terraces and admire the verdant geometric composition from the natural landscape below or the neighboring buildings and the water element that that extends as far as the eye can reach.

As you can see, Coconut Grove redefines the traditional image of a neighborhood by introducing the modern elements that move today’s society; it has become a cultural nexus where architecture, design, luxury and art encounter each other in magnificent displays of creativity. New construction projects assure its growth and international recognition with the incorporation of further office spaces, state-of-the-art residences, and improved infrastructure. Nonetheless, the current historical landmarks honor something which is even older and that remains entrenched in the identity of this community- the tropical nature that has given the neighborhood its name and enveloped its inhabitants for years. The aforementioned architectural patrimony which continues to grow and transform is only one of the numerous reasons to visit Coconut Grove and experience its spellbinding appeal in person. 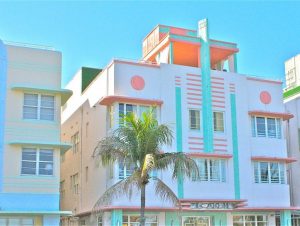 The legacy of Art Deco that embellishes Miami 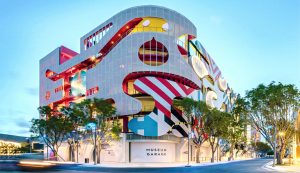 The must-see interiors at Design District 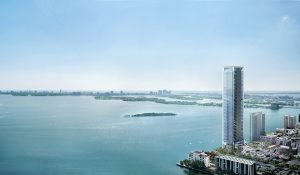