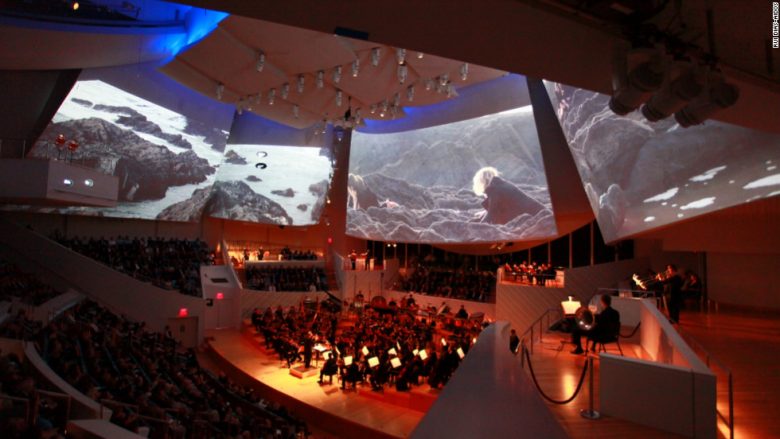 The present is an ambiguous concept and nearly impossible to grasp. By the time you finish reading this sentence it will already have submerged itself in the past. Nonetheless, it is something that has an unquestionable impact on the future and for this reason it cannot be disregarded. If we want to understand our present better and the current society we live in, we must look at the fixed elements that surround us. Permanence can be found in the outstanding buildings that have become recognizable extensions of the cities we inhabit. Therefore, to understand today’s Miami let’s look at the public buildings that shape our perception of this metropolitan, innovative and modern city.

One of the representative components of Miami’s thriving art culture is the acclaimed South Miami-Dade Cultural Arts Center where one of a kind performances take place. The modern building gracefully combines a plurality of geometrical shapes and primary materials for the development of its façade. This dynamic composition was realized by the renown Arquitectonica International team in coordination with Fisher Dachs Associates for the theatre design and Artec Consultants in charge of the acoustics.

The Center is the heart of artistic installations, programming and community gatherings. One of the main reasons for this is the kinetic light wall that recreates the experience of submerging among the bright colors of the Caribbean corals. This piece shifts its designs programmed by LED fixtures across the lobby’s transparent walls. The creator of this artwork is none other than the American sculptor, Robert Chambers, who plays with movement in art through science to produce mesmerizing creations such as the various marble sculptures displayed at the Center’s theatre.

The theatre’s capacity extends to 961 seats dispersed on three levels facing the orchestra pit and stage area equipped with a theatrical rigging system and lights. Even though the additional parts are not visible to the audience, this building also counts with indispensable support spaces such as comfortable dressing rooms, administrative offices, a multipurpose rehearsal area and work spaces. Additionally, the Center extends to a separate Activities Building where informal performances take place as well as lectures, classes and community activities. Both structures are joined by a promenade leading on the south to the outdoor area for concerts, art fairs and festivals extending towards the Black Creek Canal.

The uniqueness of the Perez Art Museum (PAMM) is visible from the first impression it creates. Among the skyscrapers, hotels and residential buildings, this museum stands out for its horizontal layout rising from the greenery of its surroundings. Rather than towering over the landscape it merges with the vines and trees that are native to Miami and retains an open structure that faces the park, water and city. The architectural team Herzog & de Meuron led by Jacques Herzog, Pierre de Meuron, and Christine Binswanger have sought inspiration in nature as a guiding element for the building’s design.

The museum rises directly from the ground, using its proximity with water as the center-point for its development. For this reason the artwork is positioned at the tide level, thus providing extra space below for an open parking-lot illuminated by natural light and filled with a fresh breeze. From this parking level, thin yet sturdy columns extend upwards to become part of the support system for the wooden canopy that casts a cool shade over the building’s main entrance. This initial trail across the outdoor area of the museum connects the structure to the maritime course.

Meanwhile, the interior is organized according to several areas: the general gallery, Focus, projects gallery and the special exhibitions gallery. At the heart of the building one can find the museum’s collection within the general gallery that functions as a main artery connecting to the other exhibition spaces. This open layout without a clear starting or end point generates a fluid dynamic with intertwining segments that incorporate unexpected spaces dedicated to the Focus and Project galleries. These rooms exhibit individual artists, specific collections and commissioned works that constantly change to include new prices and projects from several artists.

The New World Symphony orchestra academy, co-founded by Artistic Director Michael Tilson Thomas, and Lin Arison and Ted Arison, has found a new stage in Miami. The purpose-built center is recognized as a cultural landmark where musicians dedicate themselves to promoting new ways of experiencing, teaching and communicating through music. In honor of the work that takes place in this academy, its design was entrusted to a figure known even outside the world of architecture- Frank Gehry.

To the public’s eye, Frank Gehry is especially recognized for his work in the development of the Ghuggenheim Museum in Bilbao and the Disney Auditorium in LA. The Canadian architect and winner of the Pulitzer prize has established his signature mark in select stunning buildings that stand out for their mixture of geometrical designs which transform architecture into a large-scale artwork for everyone to admire from miles away.

With Frank Gehry’s rendering of the new home for the New World Symphony one comes across an 80-foot glass façade inviting you to take a closer look at the world inside this building. If this weren’t enough to capture the public’s attention, the outer surface also includes a 7,000 square foot projection wall paired with Nagata Acoustics led by Yasuhisa Toyota to make live concerts accessible to visitors at the Miami Beach SoundScape park. This landscaped park designed by the Dutch firm West 8 is one of the components to admire from the rooftop terrace. Additionally, the center’s location also provides views of Miami Beach, the Atlantic Ocean and Biscayne Bay.

Meanwhile, upon stepping into the building you are immediately encountered with dramatic tumbling waves which serve as projection screens and sound projectors. These curtains enclose the main atrium comprised of a 756-seat performance hall where different lights bounce off to create the sensation of resting inside a colorful cave filled with the melodies of New World Symphony’s orchestra.

The Performing Arts Center, Pérez Art Museum and the New World Center are some of the public buildings that embody the modern trend that mobilizes Miami’s artists and designers. Their architecture is only one of the elements that captures the city’s present, further understanding of Miami’s current reality requires us to also look at the way culture is welcomed, shaped and promoted in such buildings. What can be said with certainty is that Miami’s modern art and design will continue to flourish through the support this city offers to its artists, architects and designers.