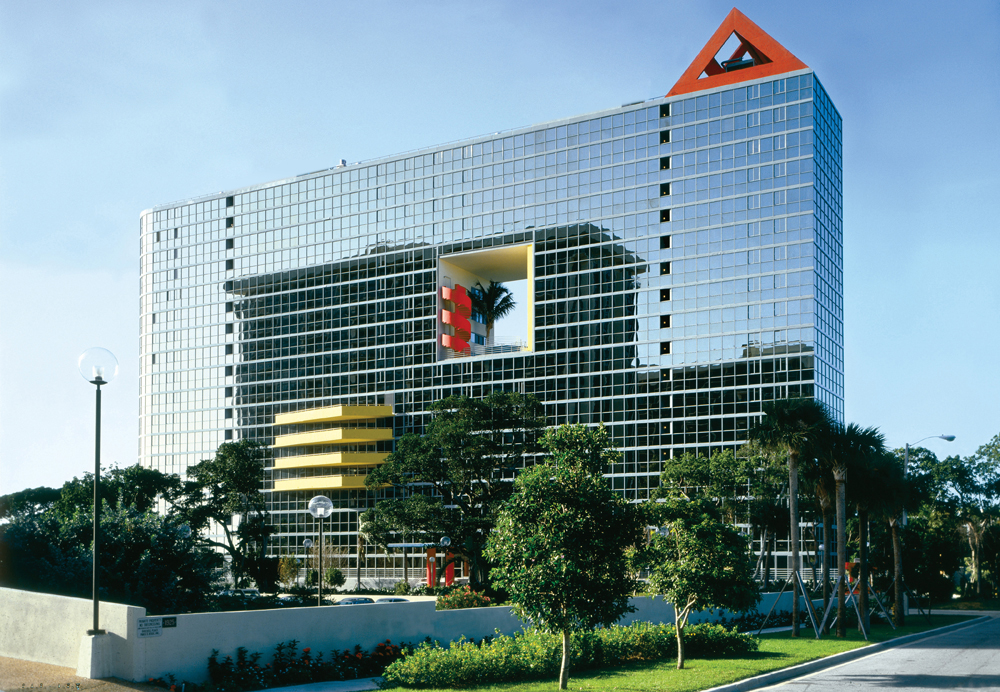 Architectural firms often come and go, but one that has remained constant in the Miami scene is Arquitectonica. Founded in 1977, the firm has become a global mainstay with projects across 5 different continents and 54 nations. But, its design-oriented teeth were cut in the Miami cityscape it calls home.

In fact, one of the prime reasons for the company’s global allure is its attention to modern design, geometry, and colorful patterns. It owes much of its design savvy to its two principals: Bernardo Fort-Brescia and Laurinda Spear. The former is a native of Lima, Peru who engaged in his early studies in Europe. He went on to study architecture and urban planning at Princeton University before earning a Master of Architecture from Harvard.

Both are fellows of the American Institute of Architects (AIA) and both have received the AIA Silver Medal for their work. Fort-Brescia largely focuses on major architectural and planning projects, many of which have gone on to define the sights of modern Miami. Spear, on the other hand, is responsible for steering Arquitectonica into different fields like interior design and landscape architecture.

Their combined architectural prowess can be seen in the wealth of commercial, residential, and multi-use structures Arquitectonica has designed over the years. The firm has been responsible for many Miami icons including the American Airlines Arena, the home of the 3-time NBA Championship-winning, Miami Heat. They have also added residential towers, hotels, museums, theaters, convention centers, retail complexes, and many more to their repertoire over the years.

Since 1977, the firm has been at the forefront of modern design in Miami and across the globe. Of course, many of its most iconic structures can be found dominating the Miami landscape, but the firm’s over 800 architects have designed projects near and far with a keen eye on global innovation.

This 20-story project on Ocean Drive is likely one of the most iconic buildings Arquitectonica has designed. In 1980, two years before construction was even finished, the design won a Progressive Architecture award. The steely glass façade was featured in the opening credits of Miami Vice, and Florida’s AIA chapter named it one of the top 100 buildings in Florida. It’s an early example of Arquitectonica’s penchant for bright primary colors and interesting geometric features.

The name speaks for itself. This trio of towers is an icon in the Miami skyline. It consists of the Icon Brickell North Tower and the Icon Brickell South Tower which are identical, each consisting of 58 floors and rising to 586 feet. The Viceroy Tower, which houses the Viceroy Hotel and several residential units is 500 feet tall and offers picturesque views of the Biscayne Bay.

The design of the Miami Children’s Museum on Watson Island is a showcase of Arquitectonica’s range. Incorporating their iconic chromatic and geometric sensibilities with an almost childlike aesthetic, the museum is certainly a sight to behold. The 56,500-square-foot building features 14 galleries that are aimed at children of virtually all ages.

Built in 2008, MarinaBlue is the 5th-tallest residential building in the state of Florida. The towering sky-blue complex is one of the hottest places in town to settle down. It’s located on Biscayne Boulevard in the heart of downtown Miami. In fact, it’s situated across the street from another Arquitectonica project, the American Airlines Arena.

Located in Hong Kong, the Cyberport is one of Arquitectonica’s numerous international projects. It consists of several buildings including a boutique hotel, a conference center, and over 27,000 square meters of retail and entertainment space in The Arcade. The Cyberport is one of Hong Kong’s premier destinations for tourism, residential living, shopping, and entertainment. Its design again features many of the hallmarks you’d expect from an Arquitectonica-designed building.

One of Arquitectonica’s biggest projects is clearly the Cosmopolitan Casino Resort in Las Vegas. Located on the Las Vegas Strip, the Cosmopolitan is a shining (albeit heavily tinted) glass structure that towers over many of its contemporaries. With nearly 3,000 rooms and over 600,000 square feet of multi-purpose space, the Cosmopolitan is widely considered one of the best hotels on the planet.

Another casino resort, the City of Dreams in Macau, is also among Arquitectonica’s past efforts. The water-themed complex rises like a blue diamond in the Macau cityscape. There are four towers in the complex and you can find over 420,000 square feet of gaming space on the property.

Bronx Museum of the Arts One of the highlights in Arquitectonica’s back catalog is the Bronx Museum of the Arts. The design has been described as almost minimalistic with its pleated geometry and an unobtrusive interior. In any event, it’s often considered one of the most sophisticated buildings in the Bronx.