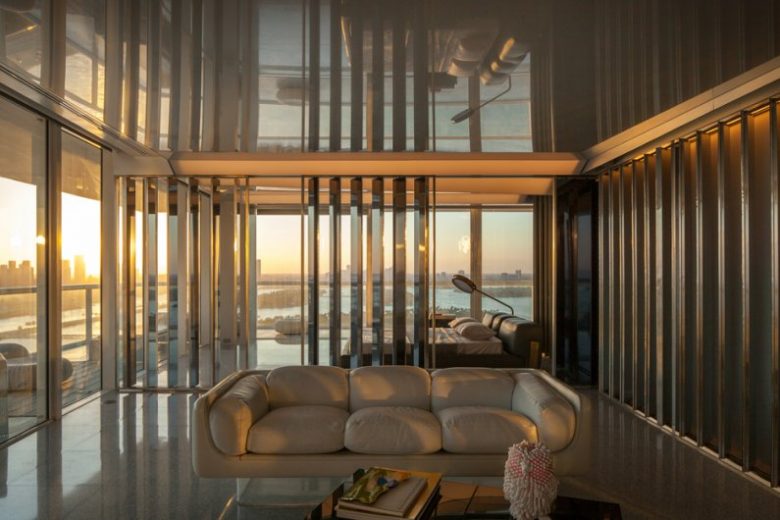 Miami has not always been the modern and sophisticated city it is today. Before the emergence of stunning skyscrapers, vanguardist buildings, color-laden streets and world-class leisure and dining options there was only the promise of innovation and infinite space for experimentation. Among the architects attracted to the initial, undisturbed landscape was none other than Rene Gonzalez who introduced one of a kind projects that thrived under the flourishing environment. His vision portrays architecture as a sensorial experience that is undeniably intertwined with its natural and cultural surroundings. Every design takes into account the mutual effects between the landscape and a building, acknowledging for example, the rising sea levels in the use of cantilever and support methods and also translating the patterns found within nature in each project. All the materials, forms and colors are puzzle pieces that link a humanist design with the character of a particular setting.

The stylized works produced by Rene Gonzalez Architects bring with them the traces of Cuban urban aesthetics which are especially visible in Miami’s Little Havana. This is not surprising seeing as Rene himself is from Cuban origin although his designs are deeply rooted and influenced by the contemporary Miami landscape that enveloped his childhood while growing up in Fort Lauderdale. It was precisely this diverse and lively environment that led to the foundation of Rene Gonzalez Architects in 1997: a company drawn to the continuous innovations in design and aiming to portray the essence of a space into a functional and artful work. Following this approach, the architectural results and detail-oriented interiors have been known to elicit strong emotions from all those who stop to observe. As recognition for the positive effects the company’s projects have had on the urban landscape and its inhabitants, Rene Gonzalez has received two American Institute of Architecture awards, Miami’s 2012 AIA H.Samuel Kruse Silver Medal for design and the AIA Miami’s Firm of the Year Award in 2011. Additionally, its international prestige has earned its founder a spot in the Condé Nast’s House & Garden top 50 designers and numerous publications in national and transnational journals.

Currently, the company is invested in several developments which include hospitality projects, the Pulse Memorial & Museum (Florida), a restaurant, condominiums and multiple residential works. Among the completed designs, one can admire the mastery and detail behind the Water Tables, the GLASS project, Plant Miami and the CIFO Art Museum, only to name a few.

As its name suggests, the artwork belonging to the exhibition “Controlled Substance”, is an ode to water and its timeless properties through the interplay of different materials that replicate the fluid movement of water. The artwork breaks down architecture into its principal components and offers them to the public in a transparent platter to show that design is meant to be genuine, open and alive. Miami’s natural environment is recreated one again in this project through the use of polypropylene, blue pigmented resin and lead. The combination generates the same shapes and hues that are present in the underwater realm where colors blur into one another as shadow and light dance across every surface of the sea. Even the erratic and unpredictable motion of the waves is exhibited in the horizontal planes of the tables while a clear cascade creates a divisive line between them. In its entirety, the installation becomes a statement urging viewers to find the connection between man-made structures and nature’s creations which inspire so many of those designs. When seen individually, each structure has the potential to transform a space’s atmosphere and imbue it with a sense of tranquility and elegance.

The 18-story residential tower elevates to the point where it gradually becomes one with the Miami Beach sky. Instead of clashing with its surroundings it merges with them through the use of fritted, patterned glass that illuminates its expansive interiors with natural light. The water element taken from the surrounding landscape is also incorporated in the lobby interiors and shared spaces to create a sense of dynamism and continuity with the gradient patterns of the beach perceived when the sand is absorbed by the sea which in turn blends with the ever-changing horizon. Every space within the building seeks to transmit this transitional moment caught by the movement between different elements. The elevator, for example, is programmed by the artist, Ivan Toth Depeña, to present an interactive installation that mimics the shift between earth and sky through the changing pixels of light that produce distinct color patterns at every level. Not only this but also the expansive terraces with mirrored walls allow the resident’s gaze to wander across 360 degree views of the ocean and cityscape that break with the static perception of buildings. The experience of unity with the outside setting is further highlighted by custom ceilings depicting a transparent-like latex surface where dancing lights from a programmable setting imitate the stars that adorn the night sky.

The design for this restaurant embodies precisely the concept of the culinary experience it imparts. Both the restaurant and the Plant Culinary school are dedicated to the elaboration vegan and plant based cuisine that aims to connect customers on a deeper level to their natural environment. The theme is highlighted by the oasys-like exterior space characterized by an abundance of palms and bamboo, as well as the arrangement of potted guava trees around the seating areas. At the same time, the tranquility that emanates from this composition is reinforced by an extensive yet slim reflecting pool that mirrors the glow of the lights which connect the palm trees to each other. This outdoor space steps into the interiors through floor-to-ceiling windows; first passing by the café’s deck made from weathered wood and adorned by a magnificent tailpot palm before merging with the indoor dining room. The restaurant’s interior is bedecked with bamboo across the entirety of the floor and ceiling which link vertical panels of the same composition with a reflective bronze mirror attached to the parallel walls. Meanwhile, from another exterior angle visitors are also granted visual access to the dinning area of the culinary school via a series of glass partition windows that offer a glance of the magic that happens within the kitchen and teaching classroom where the future’s chefs are

The sole mention of concrete brings to mind industrial buildings encapsulated within a static and grey environment where every project is built on the principles of practicality and functionality rather than aesthetics. Nonetheless, Rene Gonzalez’ design for the CIFO Art Museum challenges this misconception by bridging the differences between urban industrial décor and the flexibility found within nature’s forms. This project rises within Miami’s downtown warehouse district as welcoming jungle of colors that are captured across more than a million Bisazza glass mosaics which make up the museum’s façade. Viewers may approach this amalgam of shapes and colors through various points of view to perceive the diverse patterns which shift according to their position. On the whole, this composition is part of a game of perception in which the reality of the building unfolds with the outline of the ground stretching across the plaza. The effect is strengthened by the installation of bamboo and weeping ficus gardens that breathe life into the architecture so that it becomes an extension of the land itself; foreshadowing the experience that awaits visitors once they step into the museum.

If architecture is another form of language then Rene Gonzalez has demonstrated to be one of its selected fluent speakers. His designs communicate the importance of bringing nature into the architectural dialogue to create conscious, functional works that will grow alongside their environment. Through this fluency and understanding of design the company has also succeeded in translating the essence and movement of a landscape into beautiful forms that evoke strong and long-lasting impressions among the viewers and residents.