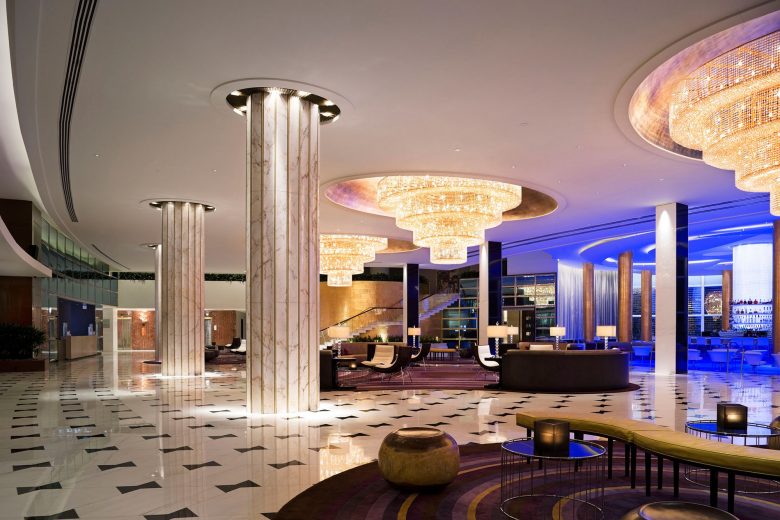 Every place has its character just as people have their own identity. In this case the character of a space is determined by the natural landscape that surrounds it, the inhabitants which constantly transform it and the function it serves. However, most urban cities as we know them have been immortalized thanks to the architecture that embellished them. Buildings reveal a fraction of the history from each place; they represent physical collective memories that materialize the ongoing history of humankind. The works created as part of the MiMo architectural movement are a crucial example of the evocative samples that marked the future of design and the contemporary environment.

Miami Modern Architecture, commonly known as MiMo, is a mirror of the tendencies, lifestyle and ideologies of a particular time period. During the 1950’s and 60’s the new advancements in technology opened a window of opportunity allowing design to recreate extravagant and never before seen ideas that would have otherwise remained nothing but intangible thoughts. People’s desire for innovation and an escape from the tolls of the past led to the development of futuristic based projects. The first manifestations were impulsed by Art Decor’s stunning neon colors, aviation and nautical themes, and stucco walls ending in round corners. Nonetheless the great depression and WWII marked the end of this movement and the beginning of a new era for design.

After WWII the invention of new household appliances and fast production methods lessened people’s working hours and increased the leisure time during which the surging middle class could enjoy the recent extravagances and work on their dreams. Luckily enough, it was dreamers such as Walter Gropius, Mies van der Rohe, and Marcel Breuer that schematized this futuristic concept in their projects which were soon re-adapted to the tastes and expectations of Miami’s citizens. This signified the use of geometric forms as a means of ornamentation, combining modernist tendencies with the previous style of Art Deco typical of the Parisian 20’s. It also meant doing away with the ostentatious approach and excessive decorations of the bourgeoisie buildings to steer the focus on functionality.

Although Miami’s streets are mostly famous for the Art Deco, MiMo still plays a crucial role in defining the aesthetics of several of the city’s areas such as South Beach. Not surprisingly, both styles exhibited in this area share many similarities seeing as the two are grounded on a vision of contemporary design. The most recognizable features shared by both are the flat roofs, curved surfaces and a mixture of colors that introduce a more playful touch to the urban landscape. Nonetheless, MiMo particularly stands out for the combination of oval shapes, curved corners and angular carports to create asymmetrical compositions as well as brise-soleil type of shades and semi-circular driveways that produce a more dramatic entrance than a regular porche would. What this shows is a clear movement towards the unknown and a freedom for architects and designers to experiment with their fascination for the surrealistic elements inspired by the modern art of the time.

The interior designs spill outdoors and vice versa through the open architecture that blurs the division between inner and outer spaces through the introduction of courtyards, catwalks, balconies and cantilevered rooflines. This splendor is further encompassed by the curved walls, bar pole columns and delta wing motifs taken from classical Greek and roman buildings. However, as grand as this style might seem, it does not adhere uniquely to luxurious and exclusive beachside resorts and five star hotels but it is also an intrinsic part of more modest and accessible apartments and houses. If you take a look at Miami’s Lapidus Mid 20th Century Historic District, the Normandy Street & Normandy Isles District, and the MiMo Biscayne Boulevard Historic District, you will come across some examples of the finest creations by MiMo architects.

The term itself, MiMo, was invented by Randall Robinson (Community Development Corporation planer) and the interior designer, Teri D’Amico, with the sole purpose of recognizing the already existent influence of the leading-edge hotel architecture in Greater Miami. Such works include the Miami Beach Fire Station Number 1 built in 1967 which stands out for the delta wing accents that take over its façade, the 1688 Meridian Building that still retains the original rectangle-based façade designed by Morris Lapidus, and The Penguin Hotel: inconspicuous by day and striking by night thanks to its blazing turquoise lights. Other projects of equal magnitude are the Di Lido in Lincoln Road and The Shore Club located in Sunset Harbor Drive. The first one, now under the name of the Ritz Carlton, stands out for its seemingly endless row of windows that belong to the Noe Art-Baroque typology of the 50’s which comes under the umbrella term of ‘modern architecture’. On the other hand, The Shore Club Hotel displays the traces of MiMo in the fusion between building and the outdoor features to create a sharp 90 degree angle composition in which the horizontal plane made up by the vast sweeping pool coincides perfectly with the center of the tower’s base.

A name to remember while thinking about the vivid nature of Miami’s singular cityscape is Albert Anis, the architect responsible for the creation of so many of the designs that embellish South Beach today. If it weren’t for this visionary figure, MiMo architecture would not have reached Mid and North Beach, Sunny Isles Beach and Bay Harbor Islands with the same strength as it did. Fortunately, his projects feature both Art Deco tendencies which are evident in works like the Clevelander, the Savoy, the Leslie and the Waldorf Towers, as well as exemplary samples of MiMo hotels, including the Royal York and the Bel Aire in South Beach. Nonetheless, the fate for many of these buildings is in most cases uncertain, if not bleak. The burden of the years combined with urban growth and modification of services has rendered some works irrelevant and despite protests from multiple citizens the buildings were demolished to avoid any possible safety hazards. In other cases, the unique and attractive elements of MiMo hotels were retained and incorporated to the new architectural elements to fit harmoniously with the current demands of design. Nowadays the question is no longer “should such historical works be erased completely from contemporary map?” but rather: “How to conserve the essence of this style in an ever-changing environment and keep it alive?”

History has a way of fixing its roots deep within a place to show the traces of its footsteps and it also has a tendency of repeating itself. To understand humanity we study history through countless of means, mainly via its written forms, therefore; if books are the keepers of words then buildings are also the shelters for stories and when their surface begins to show a pattern, then it means that a movement is on its way. In the case of MiMo architecture, the movement has already passed but its importance remains engrained not only in the character of streets but also in people’s memories. Today buildings such as the Di Lido, the Shore Club Hotel, Miami Beach Fire Station number 1, the Penguin Hotel and the Meridian Building are valued for their contribution to the history of design and their influence in the future trends that are yet to come. Perhaps these new designs will be a work of their own, unparalleled in every sense but maybe they will show the signs of the past resurfacing in the features taken from previous unforgettable buildings.