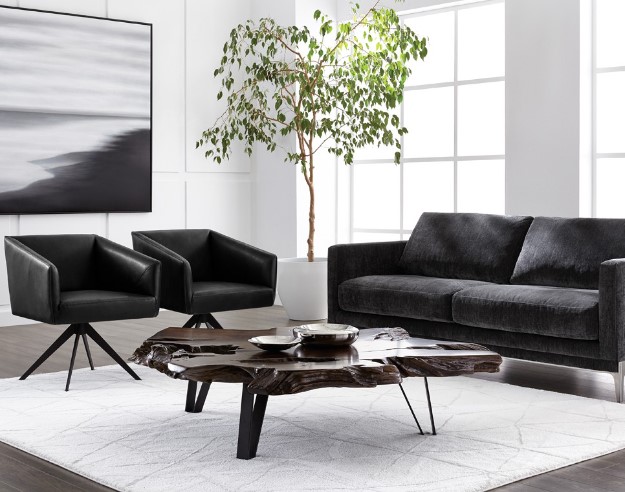 The Arbul coffee table you see before you is an exotic amalgam of the best that nature and design have to offer. The first provides the indispensable material which forms the essence of the table and the second transforms its aesthetic value into a functional substance that will enrich your home’s interior.
Pay close attention to the glossy dark base made from sturdy teak root wood held in place by black iron legs. Its singular shape encompasses the history of its origins, a journey which begins more than a hundred years ago with the ancestry of the wood itself.

Tectona grandis, most commonly known as teak, is native to Southeast Asia and has been cultivated since the 7th century. It has taken many forms ranging from majestic medieval ships to temples, palaces and wealthy residences found in India and Myanmar. The same type of wood displayed on the Arbul table shares a common source with the one that has previously adorned valuable historical spaces such as the Vimanmek Teak mansion in Bangkok and the Mandalay Royal Palace of Myanmar.

Centuries ago, farmers in the tropical forests of the Indonesian island of Java and Southeast Asia, engaged in the arduous task of felling teak trees which would later gain a myriad of uses. Hidden beneath them laid unexpected treasures left behind by the same men who had set to cut them down: tenacious teak roots were kept underground due to the difficulty that their removal implied. Months would pass until these valuable roots were allowed to come to the surface while farmers cleared the land for replanting. Like the trees, they were converted into beautiful objects to grace the lives of their owners who valued the roots’ durability and smooth elegance.

Today, individuals who possess this prized wood can rest assured knowing that the teak trees from which it is extracted are harvested in sustainable plantations by government agencies. One of such corporations is the PT Perhutani official plantation set by the Indonesian government in central Java which looks after the preservation of the highly demanded material. Consequently, the development of furniture such as the Arbul coffee table has not depleted the forests of countries like Indonesia where a new tree is planted to replace the previous one; thus, ensuring that the land is never barren.

This is an important aspect to take into account considering that exceptional products like the Arbul table are made with wood from mature trees which require approximately 80 years of patient anticipation once they are planted before their wood is claimed. However, not only does the production of such furniture demand time but also effort. Proper care of the teak tree entails a balanced exposure to sunlight, appropriate soil quality and tropical climate so it may evolve from a mere sapling into its majestic form, towering 150 feet high.

After learning this, one might wonder: what makes this type of wood so sought after and how does it change the value of a table?

Teak root distinguishes itself from other woods for its weather resistant properties that prevent it from swelling or shrinking and which also shun the dreaded rot that so often seeps into other kinds of wood. This is what makes teak furniture the ideal choice for outdoor spaces; however, when unexposed to extreme conditions, products like the Arbul table can last several lifetimes (around 1,000 years) and become part of a legacy for your family.

Considering the intrinsic benefits which already accompany the wood itself, the value of this particular piece of furniture is enhanced by the designer’s expert handiwork. The lustrous dark umber surface with soft and undulating edges is paired with equally dark and solid iron legs in an endeavor to allow viewers to recognize the organic elements that are retained from the table’s origins. What the Arbul coffee table displays is a high-quality design focused on a contemporary and minimalist approach which produces a romantic composition.
The significance of this design transcends its mere functionality as an original piece of furniture. It symbolizes the merging of a centuries-old practice with the contemporary peculiarities of today’s civilization.