Traveling in time through the interiors at Le Sirenuse 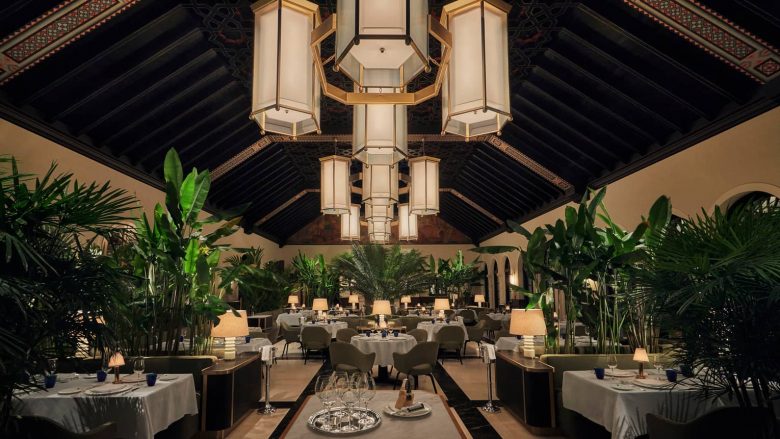 In all classic movies there is a scene in which a curtain of silence falls and the lights are dimmed, allowing the room’s splendor to speak for itself. The audience follows the protagonist into an elegantly crafted space which transports the viewer to a beautiful and timeless reality. Within Miami’s busy urban scene one can find such a refuge at Le Sirenuse Restaurant & Champagne Bar in the Four Seasons Hotel of the recently restored Surf Club.

Le Sirenuse is the stage and you are the protagonist escaping from the exhausting daily routine and the commercial atmosphere of noisy streets. The Mediterranean architecture and interiors offer a sanctuary inspired by the Italian sprezzatura philosophy; ‘a form of effortless ease’. This ideology is embodied not only in the attentive quality of the service but it is also portrayed in the restaurant’s interiors as they harmoniously combine the golden ornaments of the past with the rich blues and greens of the ocean.

Pritzker-prize winning architect Richard Meier and the renown Parisian designer, Joseph Dirand, recreated the lavish spirit of the 1930’s clubhouses and accommodated it to the 21st century standards.

The restaurant rose from the remains of what used to be the Surf Club ballroom which has now been restored to become a symbol of Italian hospitality and to match the glamour of the initial La Sponda eatery in Le Sirenuse Positano Hotel on Italy’s Amalfi Coast. No one could have imagined that the remnants of the 30’s aesthetics could be rekindled with a touch of the Mediterranean dolce vita; nevertheless, the final product can be found just within reach between Miami Beach and Bal Harbour in Collins Avenue. Guests today find themselves caught between two histories: that of the Sersale family who initiated this unique resort experience 50 years ago in Italy and the story of the emblematic clubhouse founded by Harvey Firestone.

“A chic and wonderful new Italian restaurant embracing 50 years of Sersale family history, everything is true to who we are in both style and experience.” – Co-owner Antonio Sersale in a Vanity Fair interview.

Once upon a time iconic figures such as Winston Churchill, Frank Sinatra and Elizabeth Taylor walked under the arched entrance of the Surf Club to reach the luxurious cabanas which remain standing today. As a gesture of respect for the past’s golden days the original structure was restored, thus allowing present guests to make the same trajectory past Peacock Alley as the celebrities that preceded them. However, in addition to this link with the past, Le Sirenuse also had to evoke the timeless sweetness of summer and the calm sensations of the sea. The goal was masterfully achieved with the aid of Miami’s lush natural landscape. Guests are immediately transported to the royal blue Atlantic waters with a single gaze at the extensive ocean views that lie just below the shaded terrace. To complement this vibrant color palette, the restaurant’s interiors have been framed with regal-looking tropical plants that tower above each table offering a subtle sense of privacy.

“The public areas are where the feeling of the older building meets the architecture of the new – they should have the vocabulary of the original, but the language should be contemporary.” – Joseph Dirand

Every feature of Le Sirenuse is fashioned with meticulous care and with Dirand’s unique eye for detail. In the private dining room, visitors trace the patterns that stretch across the impressive beamed-ceiling from which hexagonal prism-shaped lamps dangle forming an elegant row at the centre of the room. The space below invites people to recline against the teal blue seats as they savor the fine Italian cuisine elaborated by Chef Antonio Mermolia. All furniture is arranged in a symmetrical composition imitating the nature of small islands distributed across the ocean’s expanse to provide some further privacy for deep conversations and relaxing moments of silence. The gilded finishes and pale upholstery seem to gleam under the natural light that spills in from the curved glass doors overlooking the pergola terrace.

During the night the Champagne Bar takes a life of its own separate from that of its surroundings. It thrives under the mysterious and seductive atmosphere generated by the dimmed lights which cast an ethereal glow against Carlo Moretti’s handmade Venetian glasses and the varied selection of champagne bottles. Guests can often be seen hovering around these scene like planets orbiting around the sun as if bewitched by its promise of sweet warmth.

With the arrival of daytime Le Sirenuse’s Champagne Bar takes a new more subdued form but equally enticing. Under the abundant sunlight one can better appreciate the details of its confection set to match the art deco style with an opulent emerald green counter, golden finishes and modern white lamps. It is this image of exclusivity that draws the public’s memory back to the Prohibition Era when the indulgence of drinking was made even sweeter by the fact it had to remain a secret. When Joseph Dirand designed these interiors he did more than focus solely on the aesthetic aspects; he summoned the ambience of the past with the contemporary mechanisms at his disposal and fixed it to captivate a modern audience.